Welcome to my Dialga collection page!

Dec/3/2021: After several years and the sale of the bulk of my collection, I'm back to playing around with Pokémon a little bit again! I don't intend to collect seriously again, but I'm enjoying having a few Dialga toys while playing Brilliant Diamond.
I still have a few items (Dialga and Salamence) that I wasn't able to find buyers for and am willing to sell. One of those is the Jakks Remote Control figure, still in the package (though the package is somewhat dinged up from storage. I also have the sterling silver prize figure that I would be willing to sell.
If you're interested in these or the Salamence items, or just want to say hello as a Dialga collector, please email me: happyjolteon@gmail.com!

11/23/2013: Now that summer's over, it's time to round up all those new items! I've added 12 new Dialga, and many new Jolteon; his page has also been updated to be a bit more organized. I've also made some updates to the Dragons page for X/Y!

5/15/2013: It's been a while since the last update! I've added 21 new Dialga items, and a number of other Pokemon too. (I've added the Eevee Collection and other new Jolteon items I have photos of so far, but many more Jolteon will be added this summer!)

8/13/2012: I've added one new Dialga item (to the Figures page), and done a lot of cleanup with images on the Keychains and Cases pages. I also added a brand new Excadrill page, and added some new items to the Jolteon, Hydreigon, and Salamence pages!

8/2/2012: As before, I've mostly got Dialga updates with a few Hydreigon line items and one little Jolteon. For Dialga this round, I have 6 official items and and 3 new customs (not counting package doodles).

6/11/2012: It's taken me a while to make a full update, but I've been adding things bit by bit! There are additions to the Jolteon and Hydreigon pages as well as some new Dialga items and changes to my wanted list. Since it's been so long my count may be a little off, but I count 16 new Dialga items, not counting customs.

3/8/2012: Today I got my wave 3 Pokemon Center charms, which included all of the dragon types from Gen 4 and Gen 5, as well as a few others! Since I don't have dedicated pages for most of them though, I only added to the Keychains and Hydreigon pages, but you can see Jolteon and the Salamence line charms on their respective pages from past updates.

2/24/2012: I received a box from Japan this week, and a few smaller packages, with 9 Dialga items! Most can be found on the Flats page, and I also added some Jolteon and Hydreigon line items.

12/29/2011: I received 2 boxes from Japan this week, adding 8 new Dialga items (5 to the Flats page and 3 to the Other page). I also added quite a few Hydreigon line items, including some featuring other Pokemon as well.

12/21/2011: A tiny update to add just one item: a Korean Chinese sticker. I also updated my wanted page with a few items coming soon!

12/14/2011: Between a move, going to Japan, and an intense Japanese regimen, I've been pretty busy! But don't worry, I've been picking up lots of Pokemon stuff in the meantime. According to my count, I've added 38 new items, 4 customs, and made some updates to the Jolteon, Hydreigon, Zoroark, and other pages.

Current count: 667 items. (I just counted them manually and my count seems to have gotten off before!)

5/10/2011: 3 new Dialga added: a custom Pokedoll charm, a Topp sticker, and a new version of the soap figure! I also added a few Jolteon and Axew-line items to their respective pages. Since I'm packing up my collection for a move, I also took the opportunity to lay out all my figures for a photo, as I haven't done for a while: 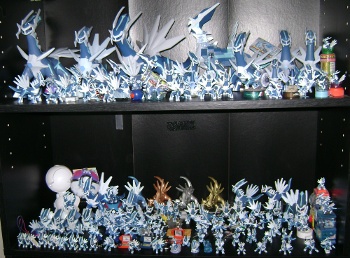 4/5/2011: 13 new Dialga items added, along with a new custom Jolteon and two great new Salamence figures! My Retsuden Amada sticker count is up to 35, but I know there's at least one more I'm missing, and probably many more than that!

2/12/2011: My very loaded Noppin/Crescent box came in today, and with it a site update! 4 new Dialga items added (including a long-awaited figure!) and one added to both the Salamence and Jolteon pages. That figure brings me up to 150 Dialga figures, although a few have the same mold and different color straps, etc...

2/8/2011: I wasn't planning on updating again so soon, but I got a few new items in the mail today: a Dialga eraser, a Jolteon pin, and some Axew line items!

2/7/2011: As with Axew, I added a page to document all my Zoroark items! You can access it here. I also have split the Wanted page into Dialga and non-Dialga items, since there are so many Dialga items. The link on the sidebar goes to the Dialga wants, but you can click a link at the top of that page to reach the other list. ^_^

2/5/2011: No new Dialga items, but I added my Zoroark collection to the Others page, and added a new page for Axew and evolutions here. (I don't have many items for him yet, but I'll add more as I get them!) I am working on adding pages like that for all my collections, but I need more photos! The wanted page also saw some updates, including moving a long-wanted item to the Coming Soon section. =)

1/26/2011: A brand new Salamence page has been added, accessible from their header on the Dragons page (or clicking here). I also cleaned up the Jolteon page the rest of the way except for the TCG (which I can't find to scan), and added 3 new Dialga items - an Amada sticker, a foam wall decoration, and a Rok.

1/24/2011: The Jolteon page got majorly revamped today, though a few items (and most of the TCG) still need photos. I also added 19 new Dialga items, most of which are in the Flat Items section.

11/14/2010: A tiny update to add some things that came in: a custom shiny painted Kid and some alternate versions of the Pokedoll!

11/12/2010: I'd been working on the site on and off for a while, and finally got it settled in enough to do an update. 32 items added (including 6 customs), and the dragon page has been updated some for Black and White!

8/17/2010: Some post-Japan catch up and adding a few other items from pkmncollectors. 20 items added, including 5 new Amada stickers, bringing that total to 28! With the ones I've got coming soon, that'll make 30 total, but how many more am I missing?

7/10/2010: I've been working on adding things for quite a while, and there is still a lot more to do! 66 items were added to the main pages, and I've also started working on the Jolteon page to clean it up and get it up to date.

3/15/2010: A large update several weekends in the making! 38 official items added, plus 4 customs! Phew!
The TCG page still needs some work, but I wanted to get everything else up sooner rather than later ^_^

1/10/2010: A small update to add my current unposted items, as I'm expecting a big box of new items soon! I also cleaned up the Other page to add more categories - the Other > Other section is much smaller now, and hopefully the page is easier to look through.

12/24/09: A very tiny update to add two Jakks pencils and the clothing tin that I'd long forgotten to add.

12/14/09: I'd done some small additions since the last update, but today I added a bunch of new items and did some cleaning up. The Dialga should be pretty much up to date now, and I've added some categories to make looking for a certain type of thing (like stamps) easier. Also, many pictures are clickable to see a full size version, but most of the older pictures don't have this feature yet.

9/20/09: I did a little cleanup and added some new Japan items. (I apparently snuck in an update on August 11th with a lot of post-Japan items that I'd forgotten to note here, whoops!


And here's an update to my figures so far: 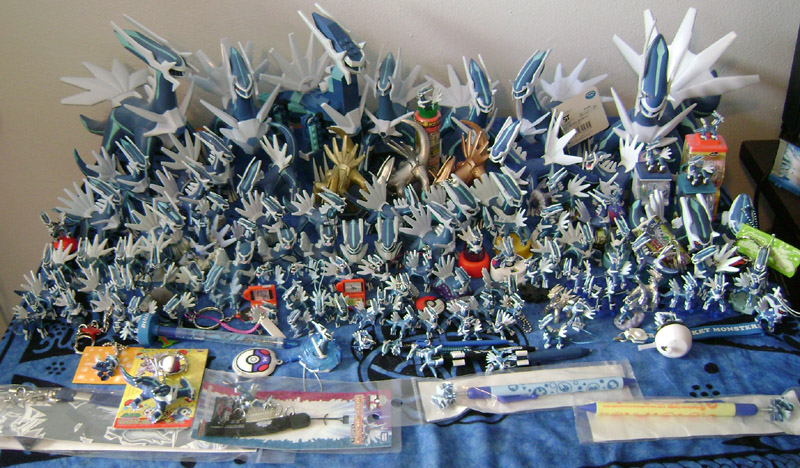 6/19/09: Just a quick update to make my plush page accurate - I added the 2009 Tomy plush that I just got in. I have some other things to add, but I'm waiting on a few packages first.

5/25/09: I opened a new shop, which was the main reason for my delay in updating this site. You can visit the shop here: (Edit: Shop closed!)

As far as items on Dialga FTW, I've added quite a few new things! This let me hit a total of 100 unique figures on the site, though I'll continue to get every Dialga figure I can. You can also see a picture of my collection all together, from what I posted to pkmncollectors: 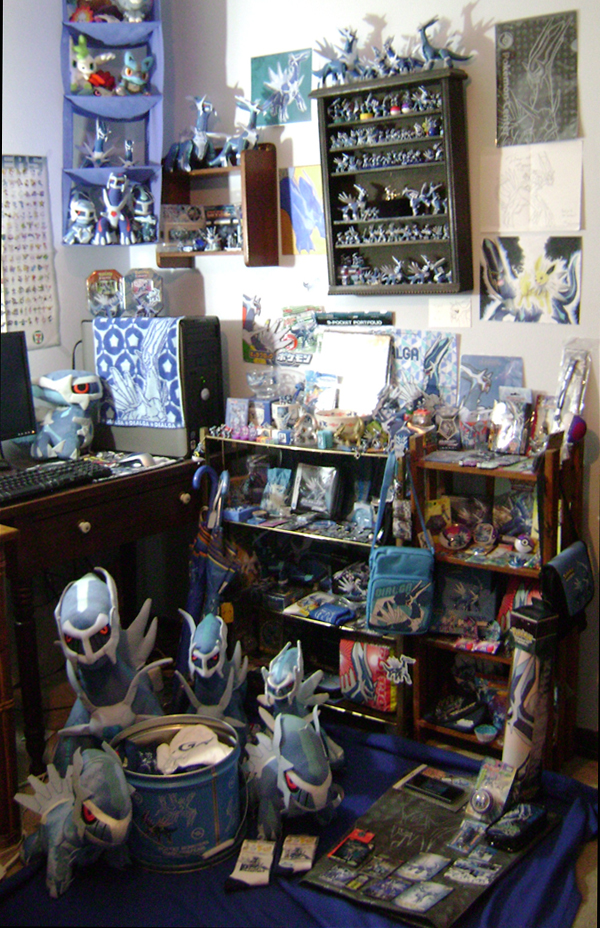 2/15/09: It's been way too long without an update! 21 new items to add this time, including some new Amada stickers, the Ramen Bowl (on my wanted list for a long time!), Diamond promo pin, Magnechip, a pair of metal charms, a Card Stadium figure, the Ichiban Kuji Cup figure, and many others.

12/21/08: 8 more new items, including the CHUPA CHUP figure (from my most wanted items list!), another watch, another pin, and the Chara-Dash figure. In celebration of getting all of the Dialga figures I know exist, I took a picture of the ones I have now: 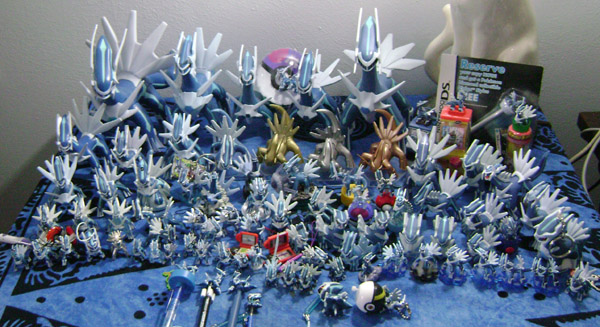 12/09/08: 8 new items (most of which are ones that missed being added to the site when I first got them. This brings the total to 300 items! Not counting items that are cut out of something (like stickers or art), custom items, or items that feature Dialga and Palkia together on the same image.

12/01/08: 24 new items, including many that had just not been added due to forgetfulness. ^_^; I also added a separate section for trading cards on the Flat Items page.

10/26/08: 10 new items, although I have several others whose pictures I can't find. I will be adding those along with the contents of my soon-expected Crescent Shop Package.

9/07/08: 14 new items, mostly from a post-Japan Yahoo! Japan shopping spree, and a few from various other sources.

8/13/08: Added a few items I forgot to upload, or have recently received, including: the Meiji Japanese promo card, the enameled keychain, and some missing Amada stickers.

7/30/08: So, what's the best way for an American Pokemon collector to expand her collection? A trip to Japan, of course?
71 new items, too many to list here!

7/9/08: 3 new items I received with other lots, but forgot to add here even though I posted about them on pkmncollectors - the American phone charm, Retsuden stamp, and a flat sticker.

2 new items arrived in the mail! Also, added one item I forgot in the initial collection.
Current count: 131 items.

We are finally online!
Current count: 128 items. Click the bars on the left to see them!


What's in the count? I count everything except items featuring other Pokemon (especially Palkia), custom items (including art) and bootlegs (ew). Different language/country versions of the same things are also iffy - I don't have the Jakks Dialga plush because it's nearly identical to the 18" Japanese one, as far as I can tell.